This was article was originally created on October 22, 2015 and posted on WUFT.org

In the late 1990s, a festival called Hempfest was a gathering ground for people to celebrate their love for cannabis and spark the air with protest.

“We used to throw out doobies,”  said Dennis “Murli” Watkins, a 67-year-old man who proudly holds the title “Doobie Tosser.”

Twenty years later, protests for the legalization of recreational marijuana use continue. But instead of throwing joints, protesters are aiming for the 2016 ballot.

On Oct. 21, Floridians For Freedom held an event on Plaza of the Americas on the University of Florida campus, encouraging people to sign a one-page petition to end cannabis prohibition for adults in the state of Florida.

Floridians For Freedom, a political action committee, has started a 34-county tour to spread a petition that states if you are 21 and older, you have the right to possess, use and cultivate cannabis.

It also authorizes the state’s legislature to regulate its purchase and sale in the interest of health and safety.

The tour is 14 days long and the committee needs to reach more than 760,000 voters in order to hit their first goal.

“We organized Floridians For Freedom to collect the signatures necessary to put this on the ballot,” James said.

The visit to UF marked the 12th day of the committee’s tour across the state to obtain the first 10 percent of signatures that they will present to the courts.

Alexander Snitker, one of the field coordinators for Floridians For Freedom, said marijuana can alleviate some issues our society faces.

“In the states that we already have legalization right now, you’ll notice that those drunk driving rates and things like that are actually going down, not going up,” Snitker said. 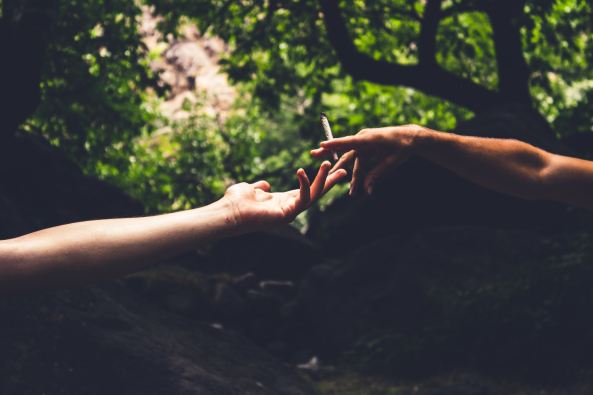 Chris Kennard, the Alachua County and Marion County Coordinator, said this is an issue that has finally gained widespread respect and approval in the community.

“We have a number of store keepers, commercial enterprises that are allowing us to put boxes up where people can [sign] their petitions so we can come and collect them,” Kennard said.

If the committee does not get the signatures they need by the end of the year, the petition will not be valid until 2018, but James said they are aiming for the 2016 ballot.

“We have thousands, but not yet tens of thousands,” James said in an email. “We are doing our internal count Monday. We have printed and distributed more than 70,000 [petitions]- it takes time to get them back.”

Holding back on the legalization of marijuana does no good, Watkins said.

“Why you wanna put someone like me behind bars? It ain’t gonna do you no good!” Watkins said. “Soon as I get out, I’m gonna be more ruckus-y, and I might even throw more doobies in front of the court house building!”